Walking or cycling around London can feel like a health hazard. Roads are engulfed in dangerous levels of exhaust fumes and pollutants. How does the London Undergorund compare?

Around 4.8m daily commuters use the London Underground every day. According to the latest research published by the Financial Times levels of pollution inside the underground are extremely high. At times as much as 10 times higher than the guidelines set by WHO. The investigation was conducted at over 75 locations across the tunnel segments inside Zone 1, central London.

The analysis revealed that the Central line is the most polluted, while Northern and Victoria lines are also high risk. 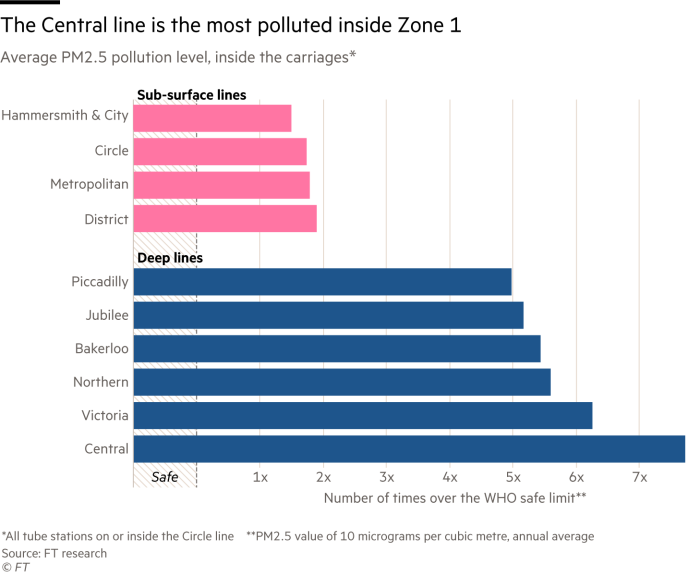 The network has an abundant level of PM 2.5 particles. These atmospheric particles are one-thirtieth of the thickness of the human hair. These fine particles, which could come from various sources including motor vehicles emissions, agricultural burning and power plant emissions last longer in the air than heavier particles. This increases the chances of inhalation by humans.

Inhalation is linked to heart disease, respiratory infection and a range of other deadly conditions. These fine particles also contaminate belongings such as luggage and equipment.

Air in Tube carriages was measured to be 18 times worse than the city’s roadside air. The investigation found that the Central line stretch between Bond Street and Notting Hill Gate is the most polluted. Also, this stretch is polluted at least 8 times the London city roadside average for PM 2.5. 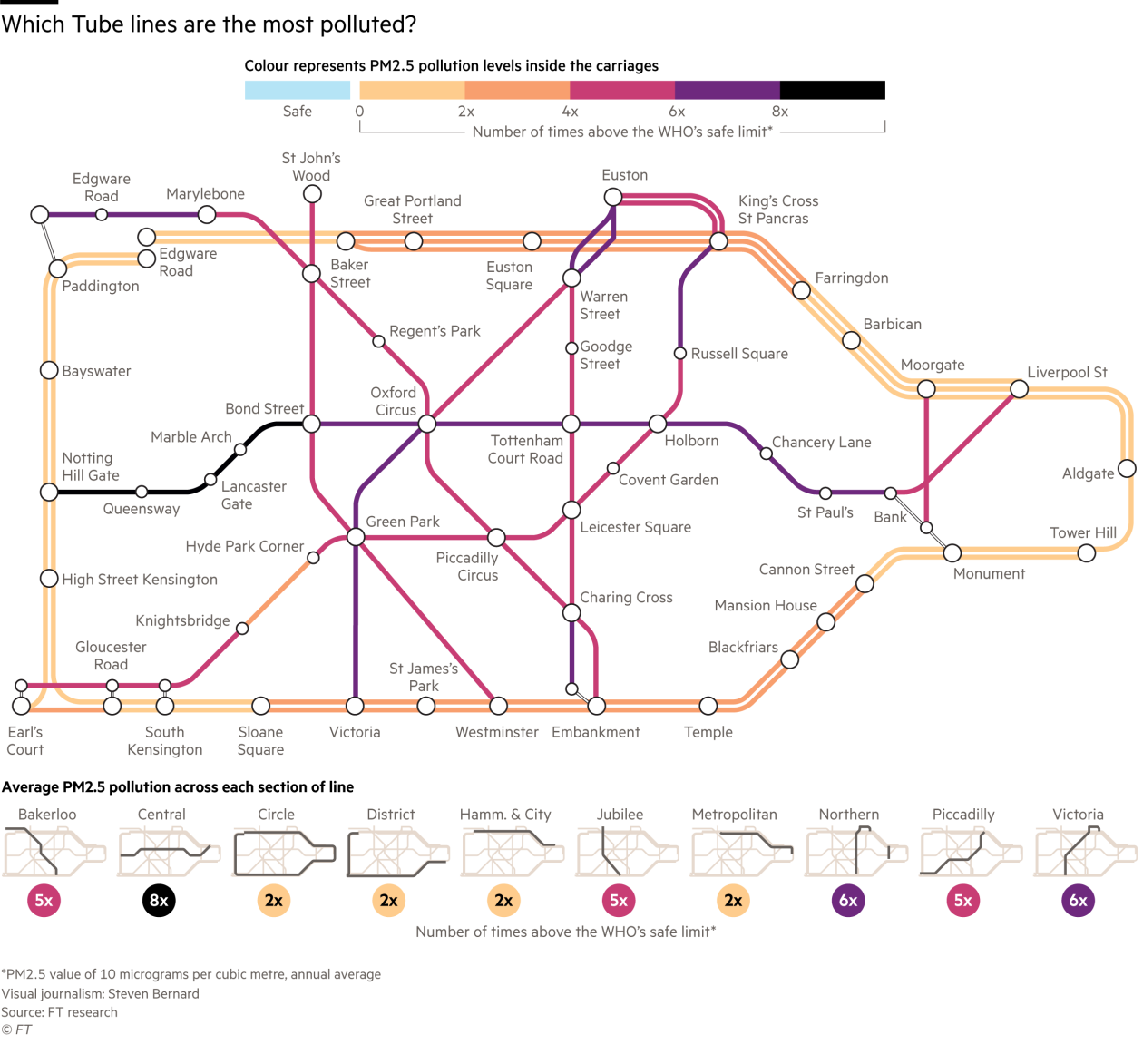 According to  Transport for London, the agency that oversees the operations of the network, the air in the Tube network is “absolutely safe” and adheres to health guidelines. However, TfL has never revealed the results of the scientific studies conducted by Kings College and Imperial College.

As the mayor of London, Sadiq Khan, likes to describe the current conditions of the network as, “One of the legacies of having the oldest Tube system in the world is having a lot of particulate matter down there”. 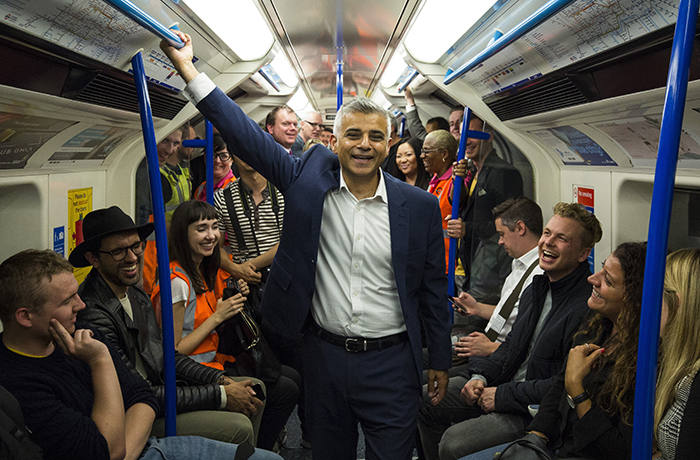 The tube network spanning over 400kms is managed by an army of cleaners, clothed in high vis vests and equipped with hoovers and sprays. The groups of 10 cleaners each spray, scrape and hoover the surroundings of the network in the wee hours of the night. The cleaners might only manage 50m of tunnel a night and it take years to complete the cleaning cycle of this vast underground tunnel network. 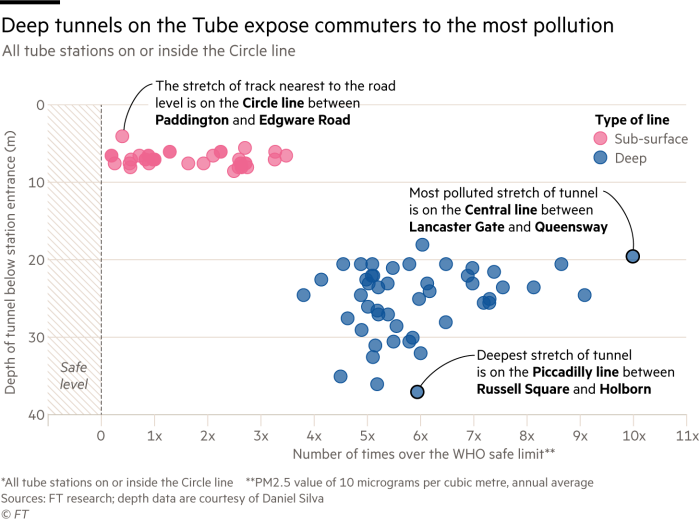 The operational manager assigned for the track cleaning, Alno Lesch, pointed out that a lot of the dust is brought in by the passengers. He also revealed that the dust is not just the particles that accumulate but large looms of hair and iron is also present. New cleaning techniques like using hoovers with special filters and applying finishing sealant spray after cleaning to keep the dust in place.

However, the cleaning of the network is not up to the par and the efforts have to be increased. As the TfLs head of track, Duncan Weir, accepts and remarked, “Air quality is now part of our thinking, whereas it wasn’t before”.

Yet another reveal by the FT investigation outlined that the early coal-powered engines that ran the tracks contaminated the network from inside and the deepest of the lines are the most effected. 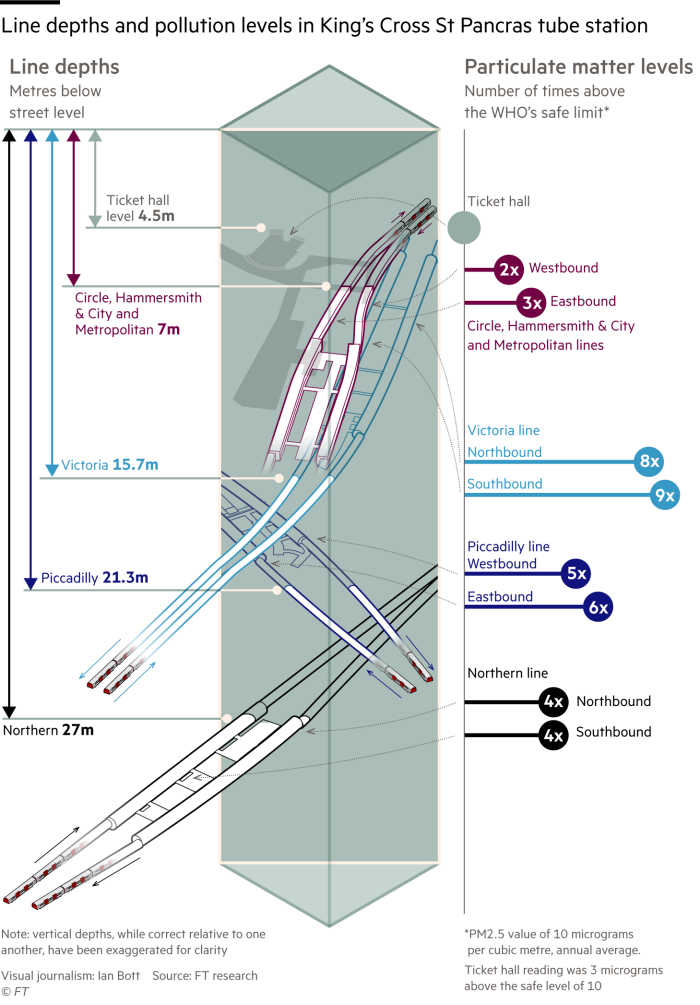 We at TidyChoice believe in maintaining high cleaning standards in your homes. Highlighting the pollution of the network essential aims to expose the kinds of pollutant you might be carrying in your home with your belongings. You can you use our checklist to test if your home is clean. If not, it might be time to bring in one of our friendly cleaners. Whether you need a deep cleaning service in Islington or a reliable weekly cleaner in Sydenham, we have the right people for the job!

For more reading on cleaning topics discover our blog.